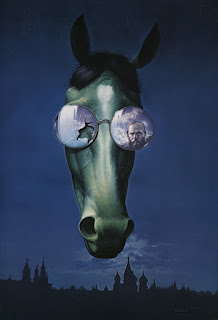 Hunky Z and Kitty were over yesterday. We drank wine, listened to a couple psychedelic Captain Maniac shows and ate chicken cacciatore fortified with Merlin mushrooms.

"Did you see the report about magic mushrooms being the safest drug you can buy besides pot?" Kitty asked me.

"Too bad the fucking government made them illegal nearly forty years ago. I thought the government was supposed to be watching out for our safety," I replied.

To prove just how safe mushrooms are we drove to drive-in once the mushrooms had kicked in. It has gotten to be it is more unsafe to sit on your Steepleton porch than it is to do anything the fucking government tells you not to do in our drive by culture.

It was our first visit of the season to the drive in. Wonder Woman, a much publicized film, was the big show. Like most movies these days it was a load of shit. The night was still marvellous however. Half moon. Bright stars. Bats hoovering the buggy suburban sky.
Posted by Mr. Beer N. Hockey at 9:56 pm