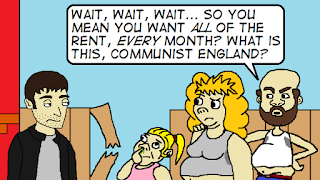 Spent the middle day of the long weekend with some trailer trash. Friends of ours spend most of their summer weekends and all their summer holidays at this place on the edge of an out of the way river with likeminded people in their RVs. There are shitloads of places just like it all across Canada filled with  snotface kids, their shitface parents and their shit eating dogs.

Sonja and I try to keep away from such gatherings because the attendees have a tendency to drink even more than we do. Sunday night was Mexican themed, trailer fucker's love their theme parties, and we figured a little tequila might be just the thing to take the edge off the unnaturally hot weather we have been living with for months now, so we let down our guard, hit the liquor store and joined the party.

"What you got in there?" One of my fellow campers asked me seeing I did not have a strawberry blender drink in my hand like everyone else.

"Tequila and soda," I told him. "When I start vomiting blood, which my doctor says I will probably start doing soon, I want to know about it."

He looked at me like I was Stephen Hawking or something before he asked me if I wanted to smoke some hash oil sprinkled with cocaine. That explained why people were not already passing out in their lawn chairs like they ought to have been. After briefly considering revisiting my drug taking past I declined the offer. Was not easy though. Nothing gives you relief from a heatwave like a visit from the White Powder gods.

If you have ever seen Canadians whooping it up in Mexico you will already have a pretty good idea what the party looked like: more vomit per square foot than a punk rock show during mushroom season. What really made it look like a night in Mexico was the lack of men swinging axes as they drank to provide wood for the campfire. The axes were safely stored away due to the fire ban.

There ought to have been river rafting adventurers making their way down the river but there is not enough water to get the rafts downriver. Fuck, there was hardly enough water in the river to get a kayak down it.

Climate change is fucking us pretty good around here. Not like we are roasting dead babies over an open fire like they do in that Cormac McCarthy novel "The Road" or anything yet but the foreshadowing of just such desperation is there for all to see if you have the stomach to look.