The Diamond of Lou Reed 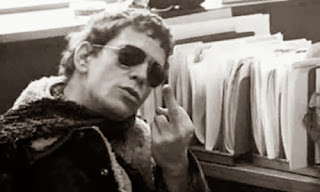 Lou Reed's hospitalization and liver transplant earlier this year prepared me for his death, which I learned about just now. It is not every rocker, not every poet, that get sick before they die.

Reed taught me how to live before I taught myself how not to die. Pedal to the metal, motherfuckers, then the sense to ease off on the gas a little.

People older than me had Elvis Presley or maybe Chuck Berry. I had Lou Reed.

If I had to do it over, I would not. Glad I spotted the diamond of Lou Reed in the stinking shit heap that is the entertainment industry. I am going to miss him until I too am dead.

After I listened to a couple talking heads eulogize Reed on television it was time to choose the first Lou Reed record I would listen to once he too had left the building.

Turned up loud enough for Lou to listen to in Hell.
Posted by Mr. Beer N. Hockey at 1:56 am

We didn't even know who Lou Reed was. We just showed up. Best performance I've ever been to. I was five feet away from the stage. Wild, powerful, insane.

The VU's performance at the Retinal Circus, if I am not mistaken, may well have been the best rock show in Vancouver ever, and there have been some dandies since then, from what I have heard from those lucky or wise enough to have been there.

I got to see Lou three times. Twice in Vancouver, once in London. He was in fine form all three occasions. My favourite guitar player and songwriter. My favourite New York City man.

A great poet, awesome rocker, and not afraid to tell the man to fuck-off.

Mahalo Lou we will sorely miss your words